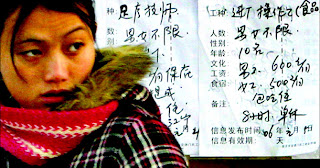 When a friend saw me reading this novel, her comment burst out : "Hey, that's you!"  My friend is right, I work in a Hong Kong owned factory. Strictly speaking, I am also one of those factory girls.
The differences between me and them are not  I am gifted nor I have any extraordinary ability. It  is merely because I am more lucky. My parent migrated to Hong Kong when I was a baby. I was raised in Hong Kong, a liberal place.  I was also well-educated. A little bit more luck can lead to a completely different fate.
The writer depicted girls who worked in assembly lines, those at the bottom of the factory's hierarchy. These immigrants from villages received minimal education. They went to the city because their families were too poor, too sexist or they would like to pursue their own happiness.
Parents treasured boys more and hence tended to keep them near around. Girls were ignored so they could leave the rural areas.  If you look at this from a positive side, chances were given to girls to free themselves, otherwise they would just end up in marriages and be treated as reproduction machines. When they went to the city, they could be financially independent , re-educate themselves and see the world differently.
Most girls migrated to city when they were still fifteen, sixteen or even younger, with no money, no knowledge and no connections. Imagine how much courage that they needed for 'going out'! They threw themselves into a city full of cons, thefts and fake products. A slogan they kept saying was "You can only rely on yourself."
The mobility,  instability and insecurity of these immigrants was beyond my imagination. A girl called Min, whose money and mobile phone were stolen when she decided to switch jobs and left a factory. The mobile phone was the only link to the city. The lost of it represented all friendships previously built in the city vanished.  Min became alone and needed to start from ground zero again.
"Keep moving." was the only thing they could do when tragedies happened.
張貼者： Betty 於 3/14/2011 10:03:00 下午

it's weird reading your english.

sometimes i feel your english is concise, straight-to-the-point, and has a style that reads like natives.

sometimes it is loaded with grammatical mistakes. Broken sentences here and everywhere.Make others wonder why u grads write such english.

My English is definitely not good. There is too much room for improvement, that's why I need to practise more.