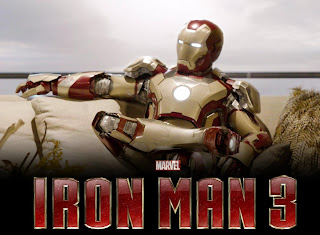 You can see what you expect to see: plenty of high-tech fancy stuff and fanatic fighting, you eyes can very busy catching up on the flying iron robots especially at the last part of the movie.

What interests me is the reflection what American has put into the movie. Although they still have the American Egocentrism's problem, the burden of blame is shifted from third parties back to themselves. Tony Stark, the Iron Man, told us at the begining and ending of the story that "I created my own devils." The terrorist attacks are created to cover the political consipiracy of the Vice President of America. Those top scientists who played the roles as "bad guys" because they are deliberately insulted by Tony Stark years before. The enemies of American are American themselves.

At the very last part, I mean the small story after the end of the movie, shows the sense of humour of producer. Nowadays people usually leave when the movie ends withouth bother to look at the "Thank You List". Therefore, they added a hook and told people not to leave, there would be "something" afterwards. The something is Tony Stark visiting a psychiatrist. He talked and talked his history and his feeling, felt good about himself but then discovered that the psychaitrist fell asleep. That's the way the producer made a joke to themselves and the audience. When they were proud of themselves being a strong team which it seems endless people (there is really a very long "Thank You List") puting effort making a fabulous movie, the audience show no interest at all and actively napping. I think this kind of joke shaped the character of Tony Stark and added the charm of Iron Man.