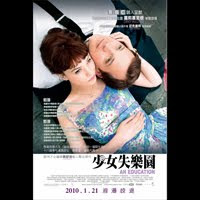 《An Education》 is a story of a pretty, witty and tough young girl, namely Jenny. This is a real life story of a journalist. She is sixty something right now. The story is very reflective.

Jenny was deceived by a thirty something matured and married guy and lost everything in her seventeen. But what I admired her most was that she could get herself back to the right track within a short period of time.

Everybody could have the chance of doing some silly things in their lifetime. I didn't think that Jenny was much to be blamed about her choice, marring a man who can make fun all the time other than going to college. She was too naive to ignore the dark side of this man, or every man indeed.

When Jenny confronted to her school headmaster, I was very impressed. She said: "Studying is hard and boring, teaching is hard and boring. So what you're telling me is to be bored, and then bored, and finally be bored again. But this is the time for the rest of my life. This whole stupid country is bored. There's no life in it, or colour, or fun. It's probably just as well that the Russians are going to drop a nuclear bomb on us any day now. So my choice is doing something hard and boring or to marry my Jew. And go to Paris and Rome and listen to jazz, to read and eat good food in nice restaurants and have fun. It's not enough to educate us any more, Mrs. Walters. You got to tell us why you are doing it." The headmaster could not utter any sensible nor appealing advices afterwards.

Obviously, the school failed to teach girls about the importance of being independent, both emotionally and financially. Or in that age, girls got to college just because there would be better chances for them to secure rich husbands. Every body knew or expected that the final destiny was marriage. Therefore, what's the point of wasting time if Jenny could have married a rich guy right now? They failed to let Jenny know about the consequences if she bet her life solely on a man, or any man. They failed to make her understand she would have limited choices if she did not have a degree and her lover left her for whatever reasons.

Jenny's headmaster was a typical narrow-minded old lady. When Jenny admitted her mistakes and begged for going back to school to extend one year study, she rejected with delightful smile. She simply did not love her students. Headmaster was just a job, a title and a social status that could make her feel good about herself. How cruel could that be by kicking out a student who was so good at academic? How cruel by ruining a youngster whole life just because she had a slip?

In contrast to the headmaster, Jenny's teacher was really a caring lady. She helped Jenny to go through one year of study. Jenny was able to get into college afterwards.

When shit happened, you know who was willing to support and stay with you.

thanks for sharing I'll watch that moive....la!