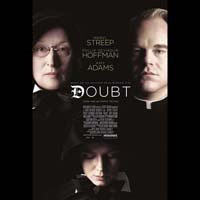 This movie is not in vogue, the actors and actresses are neither handsome nor charming, so I guess not many friends of mine are interested in it. However, I was attracted by the storyline, I went to AMC to watch it on my own.

Extract of the storyline is as follows:
"It's 1964, St. Nicholas in the Bronx. A vibrant, charismatic priest, Father Flynn (Academy Award® winner Philip Seymour Hoffman), is trying to upend the schools' strict customs, which have long been fiercely guarded by Sister Aloysius Beauvier (Academy Award® winner Meryl Streep), the iron-gloved Principal who believes in the power of fear and discipline. The winds of political change are sweeping through the community, and indeed, the school has just accepted its first black student, Donald Miller. But when Sister James (Academy Award® nominee Amy Adams), a hopeful innocent, shares with Sister Aloysius her guilt-inducing suspicion that Father Flynn is paying too much personal attention to Donald, Sister Aloysius sets off on a personal crusade to unearth the truth and to expunge Flynn from the school. Now, without a shard of proof besides her moral certainty, Sister Aloysius locks into a battle of wills with Father Flynn which threatens to tear apart the community with irrevocable consequence."

In one of the summons, Father Flynn's preach touched me. "A person who takes a pillow to the roof, cut it into half, what will happen? All feathers spread out, if you want to pick them up, can you do it? No, you can't. And that is 'Gossip'. " We should be careful not to spread unfounded rumors and destroyed ones' reputation.

Sister Aloysius Beauvier reminded me a sister in my secondary school, obstinate and unkind. She guarded the school like a prison just to fulfill her own vanity. I could not feel love from sister and none from God either, if God does choose her to be his messenger. I was so lucky that I could finally escape from her control after 7 years of torment.

Why I hated the sister so much? I have a reason. There was an accident in a physical lesson when I was Secondary One. The teacher instructed us to run all together. A friend stepped on my leg unintentionally and I fell down when I was running in full speed. My mouth crashed on the ground, 3 teeth were broken and skin torn apart. I knew that it was just an accident and I did not blame anyone. However, the sister accused that it was my own fault and forced me to admit it. Her argument was that all students were intact but why me? Why it was only me falling down? I was an innocent and inexperience girl at that time, so I did not know how to confront her. The combination of my feeling was anger, fear and being insulted. The pain she put on me by her words far outweighed the physical pain I suffered from the accident. I could not forget how cruel she had treated me, her words were carved in my mind. When I grew up, I realised that her purpose of saying that was just to get away from any responsibilities of my accident. I hated her more and more. Stabbing a knife to somebody's heart in order to protect her own interest, that was the true colors of the sister.

oh, poor girl. Hope you had your teeth well fixed.
Forgive the Sister though I understand it is very hard to do so. At least try to erase her out of your memory like putting her to the recycle bin in your PC. You will feel much better. Hating someone will hurt yourself psychologically.
It was my experience.